“Dead naming” and “misgendering” has become a hot button issue for Twitter. And they’re willing to take up that cause for anyone from Bradley Manning to known sexual predators. Remember Bradley Manning? Twitter sure as hell doesn’t.

That’s right. Twitter is willing to lockout verified accounts for asking a question in the proper context. Bradley was in a Men’s prison. Period. But my lock out is trivial compared to other examples. Twitter itself has been weaponized by sexual predators to totally destroy lives. This is not hyperbole. And they won’t stop at me.

Jonathan Yaniv aka Trusted Nerd, is a transgender Man-to-Woman who has been using new laws and his connections on the internet to ruin lives. When Twitter user Megan Murphy suggested that “men aren’t women”, she was suspended. But that wasn’t the end. Jonathan, went before the town Council of Langley to take credit and urge further action. In other words” “Someone hurt my feelings, please hurt them.”

This clip below is from Benjamin Boyce’s YouTube video “Will I Get Banned for this Video?”

Jonathan Yaniv seems to have a tampon fetish and an overwhelming concern of how to help “10-12” year old girls use them. He talks about this enough to be thrown out of many of the Facebook groups he frequents:

Countless people have sounded the alarm about Jonathan Yaniv, yet he is protected and the ones trying to warn others are banned. He is, the Canadian “Chelsea Manning”. The only difference is he hasnt been to prison yet. From Miranda Yardley’s documentation:

“Yaniv has been accused of reaching out to young girls on social media to give them his phone number. One girl complained to an adult that he made comments of a sexual nature to her, such as asking her to be his girlfriend, which caused her to feel uncomfortable.”

Yaniv’s online adventures have been well-documented. It’s nearly endless. His own words and actions cause such concerns that the people he encounter eventually Google him and find others trying to expose him. “Louise” on twitter has an extensive thread on this and how she needs to seek out legal counsel in order to comabt the harassment from this man obsessed with inserting tampons into little girls. Luckily, even some kids he contacts seem to recognize him as a pedophile: 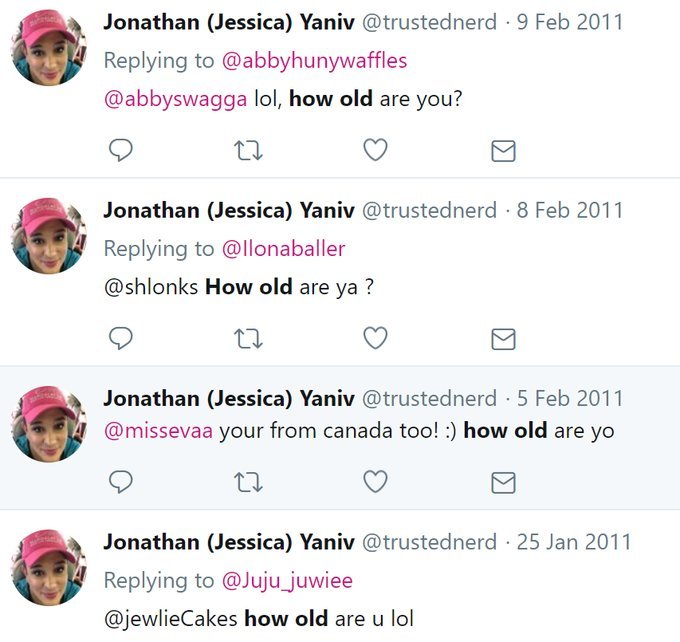 What? He’s searching them by location his first greeting is basically “ASL?” from AOL days?

But like Bradley “Chelsea” Manning, he will be protected and all of the new rules imposed on society by Leftists will be used to bludgeon us into submission first, and then used to toss us in prison. “Censorship first” seems to be the new creed of the “open-minded” and “tolerant”.

It doesn’t stop at Twitter either. Yaniv is able to get WordPress staff to “ninja edit” articles on him, get Reddit Admins to delete posts critical of him, and strike down upcoming YouTube streams about him. Even broadcast media outlets that have taken up the cause for sexual predators. 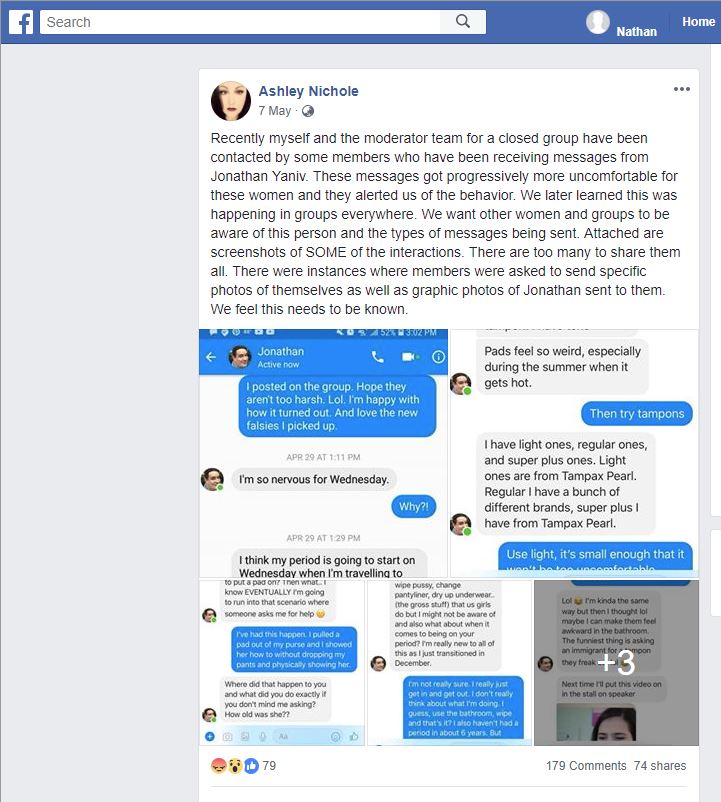 Will Facebook help? Not a chance. He has been kicked out of over 600 Facebook groups for his weird and predatory behavior. But he’s not banned or locked out. He would have to “misgender” or “dead name” someone to get their attention

Seems like the entire internet is ready to silence normal, concerned people so that sexual predators can have free reign. The most recent example is the YouTube “Upcoming” stream on Jonathan Yaniv by Kiwi Farms. It was announced, the internet got excited for it, and Jonathan was able to contact YouTube and get them to ban the entire stream. A stream that had not yet happened.

It now exists only on Bitchute here. A site with no traffic garners almost 5,000 views on Jonathan Yaniv! So now, along with Twitter, Facebook, Reddit, and WordPress, we have YouTube hopping into the fight to protect sexual predators who use the left’s new rules to censor us. It’s almost like they don’t have the courage to address the fact that society has real deplorable people.